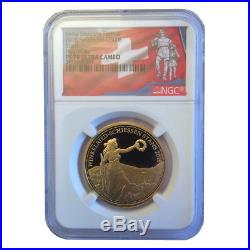 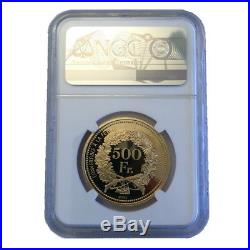 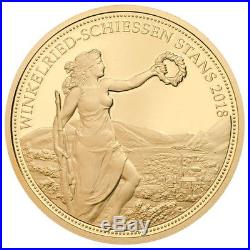 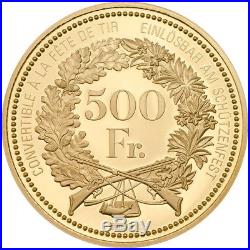 This truly rare (mintage only 275) and beautiful pure gold proof from Switzerland (part of the long running and traditional series of Swiss Shooting Festival Thalers or Talers) offers a classical, allegorical design depicting a standing beauty. (Helvetia or Victory) holding a rifle and awarding a crown or wreath of laurel, while overlooking Stans in the Nidwalden valley! Graded a perfect Proof 70 Ultra Cameo PF70 UC by NGC, with a custom label! This listing is for the 2018 Gold Shooting Taler Proof slabbed and graded PF70 UC by the Numismatic Guaranty Corporation, with a custom label depicting Wiliam Tell and his son and the Swiss Cross flag!

Talisman Coins is absolutely thrilled to be able to bring you this beautiful, proof finish Shooting Thaler. This year's Shooting Festival is held in the capital city of the Swiss Canton of Nidwalden, the beautiful and historic town of Stans, smack dab in the middle of Switzerland. We've managed to secure a few of these gold 500 Francs.

From a total mintage of just 275. These hard to find Shooting Thalers (or Talers; so-called from the days when that was their face value) have been issued since the mid-1800s in tiny numbers, and are very collectible, to say nothing of extremely attractive! The mintage limit for 2018 is. Only 275 gold shooting taler. S - much lower than in previous years. Making this beauty truly rare! A key to the entire Shooting Thaler series!

Get in on the ground floor and get yours now! Swiss marksmanship is legendary, dating to the hero William Tell (who shot an apple off his son's head). This tradition of superior marksmanship was established during the Old Swiss Confederacy, in the 15th century, when Shooting Festival participants showed off their aim using the crossbow.

Of course, Shooting Festivals are meant to be fun, but they have a practical side, too - they keep the citizen soldiery drilled and sharp! This has always been of particular importance in a country like Switzerland, with a relatively small population and surrounded on all sides by potential enemies. Calling shooting is the national sport of Switzerland would be an understatement, to say the least! Today, the Swiss Shooting Association boasts 85,000 active, dues paying members!

That amounts to over 1% of the total population! At a Swiss Federal Shooting Festival (a major event, held every five years), over 50,000 marksmen will convene for four weeks to demonstrate their shooting skills.

Here's an exquisitely beautiful, classical vignette certain to please the most traditional and refined tastes in design, engraving and aesthetics. The pert and upright lady is an allegorical figure. It is easy to interpret her as Helvetia, the allegorical female personification of the Swiss Republic. Her classical Roman-style toga garb is consistent with many representations of Helvetia, including the spear-armed lass on much of Swiss circulating coinage. However, our 2018 Helvetia has traded in her traditional spear for a marksman's rifle or long gun, which she holds in her right hand.

Like the Swiss citizen soldiery, she is armed and ready for action at a moment's notice. Her long, flowing golden tresses, hair bouncing gently in the light Alpine breeze, are in contrast to the braided hair worn by the famous Swiss Miss or Vreneli, and represent the liberty of the Swiss Republic. That she is free and unintimidated is also evident in her carefree attitude and bare-breasted couture. Helvetia stands high and proud on a rocky crag in the Swiss Alps.

She overlooks the stunning scenery of the Nidwalden Valley, in the center of which is the Cantonal seat, the capital town of Stans, where the 2018 Schutzenfest is held. This dramatic and impeccably crafted vignette, with its exquisitely beautiful Helvetia (or Victory) above the scenic Swiss countryside receding to the mountainous horizon, is one of the most superb in the long history of Swiss Shooting Festival Thalers - truly one for the ages! Although she is not winged, another figure, the goddess Nike (or "Victory") is also suggested by the laurel wreath she offers, in her outstretched left hand, for the winner of the Shooting Festival. Victory appears to be proffering the laurel wreath of victory, encouraging the marksmen at the festival below in Stans to strive to their utmost for this most valued of prizes. The entire vignette is executed in a blast-white, cameo proof finish, with black, deeply mirrored fields, that represents the culmination of the minter's art. We note that for 2018, the Shooting Festival in Stans has a very special title - it is, as the obverse legend notes, the WINKELRIED-SCHIESSEN STANS 2018. That is, it is designated the "Winkelried Shoot", after the legendary Swiss hero who called Stans his home in the 14th century.

Please see the feature just below for more on the hero Arnold von Winkelried. > On the reverse, the traditional wreath of oak leaves (on the left) and laurel (on the right) surround the denomination of 50 Francs. Beneath the wreath, a marksman's powder horn and bandolier hang from a pair of crossed rifles or muskets.

The legend indicates (in both French and German, two of the four official languages of Switzerland) that the coin is "redeemable at the shooting festival" - not that you'd want to! Arnold von Winkelried, Hero of the Battle of Sempach. Arnold von Winkelried (or sometimes simply Arnold Winkelried) is a legendary hero of the Old Swiss Confederacy. According to 16th century Swiss historiography, Winkelried's sacrifice brought about victory for the Swiss at the Battle of Sempach in 1386, against the army of the Habsburg Duke Leopold III of Austria. This is particularly significant for our 2018 Shooting Festival (dubbed the "Winkelried-Schiessen", or Winkelried Shoot), for von Winkelried is the most famous denizen of the town of Stans, where the festival is held this year. A memorial and statue to Winkelried stands in Stans, where he is celebrated at a hero second only to William Tell. According to legend, the Swiss troops fighting the Austrians at Sempach were greatly outclassed; the light infantry of the Swiss citizen soldiers could not break through the close ranks of the armored Habsburg knights and pikemen. With Swiss fortunes slipping away, and seeing only on path to victory, which hung in the balance, Arnold von Winkelried shouted to his fellow citizen-soldiers: I will open a passage through the line.

Protect, dear countrymen and confederates, my wife and children... Winkelried then hurled himself upon the Austrian pikes, taking some of them down with his body, and thereby opening a gap in their close-knit ranks. This broke the Austrian front, creating an opening through which the Swiss infantry could attack. Seeing their chance, the Swiss charged forward furiously. The Swiss attack not only broke through the Austrian ranks, it completely routed the Austrian army.

Duke Leopold himself was slain on the field of battle, and with him a large number of his knights and nobles, including numerous members of the noble families of Aarberg, Baldegg, Bechburg, Büttikon, Eptingen, Falkenstein, Hallwil, Reinach, Rotberg and Wetter. The victory itself was miraculous, to the extent that Winkelried's sacrifice is celebrated in Switzerland to this day.

Even the oldest accounts of the battle are unambiguous in the judgment that the Swiss victory was against all odds and expectations. Their crushing victory over the very cream of the Austrian knighthood and nobles forced the Austrians to sue for peace and sign an armistice.

The battle of Sempach came as a severe blow to wider Austrian interests in the region, and allowed for the continued growth and ascendancy of the Old Swiss Confederacy. Not without justification, the Battle of Sempach came to be seen as the decisive turning point between the foundation of the confederacy as a loose pact in the 14th century, and its growth into a significant political and military power during the 15th century. At the peak of the military success of the Eight Cantons (between 1470 to 1510), Swiss histories focused heavily on the Battle of Sempach. Similar to William Tell, Arnold von Winkelried was an important symbol during the formation of the Swiss federal state, and an icon of Swiss independence during World War II. Napoleon himself referred to Winkelried as the Swiss Decius immortalized at Sempach. The coin is encapsulated inside a Numismatic Guaranty Corporation (NGC) archival quality plastic holder (or slab) that is individually numbered with an unique, NGC serial number. Talisman World Coins and Medals has been in business for more than 25 years and is one of the largest world coin direct distributors and wholesalers in the world. The item "Switzerland 2018 Stans Shooting Taler 500 Swiss Francs Gold NGC PF70 PR70 UC" is in sale since Monday, February 5, 2018.

This item is in the category "Coins & Paper Money\Coins\ World\Europe\Switzerland". The seller is "talismancoins" and is located in Saint Louis, Missouri. This item can be shipped worldwide.