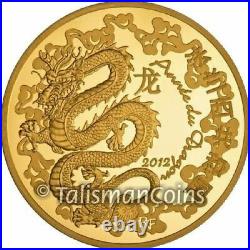 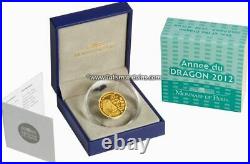 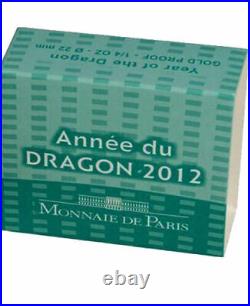 Celebrate the most auspicious Year of the Dragon with this TRULY RARE (mintage = 1,000) Euro coin, minted in precious gold! Centuries ago, the Chinese invented a calendar based on the lunar (rather than the solar) cycle. There are twelve animals in the Chinese lunar zodiac, each corresponding in sequence to a year rather than a month.

Are sought after and, in most cases, very hard to find! The Year of the Dragon - Most Powerful and Auspicious!

According to tradition, people born during a Year of the Rabbit (1904, 1916, 1928, 1940, 1952, 1964, 1976, 1988, 2000, and 2012) are said to exhibit that animal's attributes. While Dragons frequently help others, rarely will they ask for help. Others are attracted to Dragons, especially their colorful personalities, but deep down, Dragons prefer to be alone. Perhaps that is because they're most successful when working alone.

Their preference to be alone can come across as arrogance or conceitedness, but these qualities aren't applicable. Dragons have tempers that can flare fast! They're driven, unafraid of challenges, and willing to take risks. They're passionate in all they do and they do things in grand fashion. The Oriental or Chinese concept of the dragon is much different than the European notion of this beast.

Whereas in the West dragons are nearly always evil, fire breathing creatures of immense size and destructiveness, in the East they are beloved. Chinese dragons are benevolent, representing most auspicious powers, particularly control over water, rainfall, and floods. In yin and yang terminology, a dragon is yang (male) and perfectly complements a yin (female).

Is a mystical being, able to use an almost unlimited range of magical or supernatural powers. It is able to disguise itself as a silkworm, or become as large as our entire universe. It can fly among the clouds or hide in water.

It can form clouds, turn into water or fire, become invisible or glow in the dark. It is interesting to note that the Oriental dragon's ability to fly is a magical (not a physical) ability; unlike European dragons, Chinese dragons are rarely if ever depicted with physical wings. Historically, the dragon was the symbol of the Emperor of China. Many pictures of oriental dragons show a flaming pearl under their chin. The pearl is associated with wealth, good luck, and prosperity. In Chinese culture, the pearl also symbolizes perfection, which is only obtained through the highest forms of wisdom. As such, the pearl is retained in the clutches of the dragon, who, like the emperor, reveals great "pearls of wisdom" as it bestows abundance and prosperity upon its people.

The dragon is always the most popular animal, and always sells out. Previous Year of the Dragon coins now sell for many multiples of their issue prices.

It is surrounded by an intricately-engraved oriental border design. The legends in French and Chinese translate as "Year of the Dragon - 2012". The reverse features a portrait of Jean de la Fontaine, the French poet famous for writing a collection of fables, known today as. Many of his stories, borrowed from the Greek poet Aesop's, involve animals that act like people.

Each short tale is designed to teach a lesson or as a comment on human behavior. All twelve animals of the Chinese lunar calendar are also depicted (all can be found in his fables), along with the year of issue and the denomination.

Each coin is encapsulated and presented in the traditional, blue Monnaie de Paris gift box. An individually numbered certificate of authenticity is included.

This item is in the category "Coins & Paper Money\Coins: World\Europe\France". The seller is "talismancoins" and is located in this country: US.