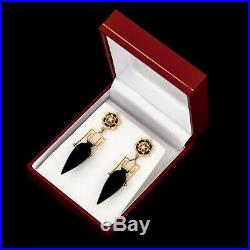 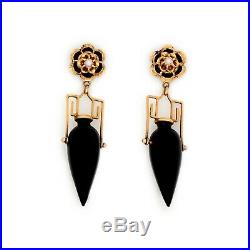 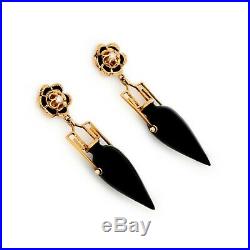 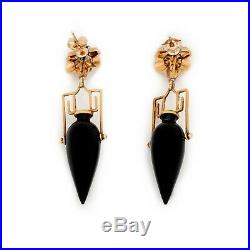 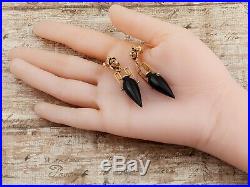 We have similar Onyx and Pearl items, which would pair nicely with this piece, for sale this week. Item Description by: Cait P. Markings : Unmarked, Tested, and Guaranteed. Gram Weight : 11.3 Grams. Metal Type : 18k Yellow Gold.

Accent Stone Measurements/Color : 2.8 mm diameter, Lustrous cream hue. Stone Treatment: The stone(s) appear to be untreated, but we are not certified gemologists.

Your jeweler can easily convert these to the preferred backing style you desire. For Pierced or Non-Pierced Ears : Pierced. Notable Features : These earrings were handmade during the Retro period of the Art Deco era. Composed of 18k yellow gold, the earrings were made by the Russian designer Erté and feature huge onyx stones, seed pearls, and taille d'epargne enamel designs in the style of Georgian and Victorian revival pieces. Romain de Tirtoff, also known as Erté, was a Russian jeweler based in France and one of the most influential artists of the Art Deco and Retro eras. These gorgeous earrings, with their large stones, are an excellent example of the Hollywood Regency style, which emerged during the Retro period. Eager to show off their wealth and style, Hollywood celebrities and socialites would adorn themselves with glamorous jewelry, usually, featuring large and beautiful stones. The design of these earrings was inspired by and in turn, inspired designs by Van Cleef & Arpels, Cartier, & Tiffany that were influencing the Hollywood Regency style of the Retro era, making the viewer think of the likes of Ava Gardner, and Katherine Hepburn. These earrings are said to have been made by Erté and worn by one of his models, though they lack any markings, which is typical for earlier pieces from the Russian jeweler. The bold geometric elements and unique cut of the onyx stones are excellent examples of the design styles of this celebrated jeweler. Each earring consists of a large onyx stone carved into the likeness of an urn, a bold choice meant to evoke the mourning and memento mori jewelry of the Georgian and Victorian eras, which saw a revival during the Retro period. The stones were meticulously carved and drilled through the middle to be strung on yellow gold posts, which form part of the unique geometric design of these earrings. The pairing of yellow gold with onyx was very popular in mourning and memento mori jewelry, as the contrast created between the opaque black onyx and vibrant gold was sure to draw the eye. The geometric settings and onyx stones dangle from yellow gold floral accents which were painted by hand with black taille d'epargne enamel, another hallmark of mourning and memento mori jewelry. Sitting in the center of each floral accent is a lustrous cream seed pearl kept secure in a yellow gold buttercup setting which raises it up and away from the flower. The creamy luster of the pearls is an excellent complement to the warm hue of the gold, enhancing the beauty of both the stones and the metal.

The earrings are completed with posts with butterfly backings, making them suitable for pierced ears. An incredible example of the early, unsigned work of the France-based designer Erté from the Retro period, these earrings would make a rare and valuable addition to any antique jewelry collection. Don't miss your chance to preserve this piece of cultural history.

This listing is for the item only. The Art Deco era is famous for being the "Gatsby" or "Roaring Twenties" era. A lot of gorgeous and timeless designs in jewelry came out of this period.

Jewelry from this period was most often crafted between 1920 and 1940. Art Deco jewelry sometimes featured white gold or platinum, geometric designs, European cut diamonds, filigree, and calibre cut stones that are specifically cut to fit the design of the piece. During the Art Deco period jewelers often made jewelry upon custom order, this would often take weeks to months to completely craft by hand. Retro jewelry refers to pieces created in the 1940s and 1950s.

This was a period during which jewelry designers were largely influenced by the changes stemming from World War II. These designs reflect an infusion of futuristic vision with elements inspired by preceding periods, encompassing a variety of gemstones, shapes, and materials.

Materials used commonly in Retro jewelry are gold, gold alloys, and silver as the wartime put a restriction on the use of platinum. Designs can be masculine, geometric and modern, or softer, more feminine and floral. The Hollywood Regency style came into fashion during the 1930s, ushered along by the Golden Age of Hollywood. This style was heralded by bright, contrasting colors and modernization of the opulence of Baroque styles, featuring a deliberately frivolous extravagance that screamed glitz and gla mour. Big girls need big diamonds was taken to heart, and the gorgeous Hollywood stars decked themselves appropriately, with blindingly glittering jewels to showcase their lives of luxury. Romain de Tirtoff, widely known as Erté, was an influential Russian designer during the Art Deco, Retro, and Mid-Century eras. Originally from Russia, Erté moved to Paris, France in 1912 to pursue a career in fashion, design, and jewelry.

The son of a Russian admiral, he would change his name to Erté upon arrival in France so as to avoid any embarrassment for his family, who had hoped he would become an admiral like his father. Once in Paris, Erté established himself as a cover designer for the magazine Harpers Bazaar, the fashion designs he produced during the time earning him the title The Father of Art Deco. The jewelry pieces produced by Erté and his studio were meant to be practical art piecesjewelry that could be worn every day while still going beyond the designs that were popular during the Art Deco era, which the designer saw as dull and uncreative. Erté jewelry is known for its intricate details and lines as well a stones with inspired and original cuts and unusual colors. Each piece would be designed by Erté on paper before being passed along to the jewelers, who would bring his masterpieces to life, embracing the philosophy of Art to wear that guided the designers approach to jewelry and fashion.

In 1976 Erté was awarded the title of Officer of Arts and Letters by the French government as recognition of the significant role he played in the development of fashion and jewelry styles since his arrival in France in 1912. To this day, his works remain on display in museums all over the world. The Victorian era took place from the year 1836 to the year 1901, which was the span of Queen Victorias reign. Queen Victorias style was undoubtedly influential on the fashions of her country and ultimately led to three distinct jewelry trends emerging from the era. The first of these three styles was the Romantic period.

The Aesthetic period was more lighthearted and airy than the previous periods and focused on aesthetic beauty and joy. This era features floral, natural, and feminine motifs, and utilized chased gold designs, enamel, and seed pearls. Mourning Jewelry has been around for hundreds of years but became especially popular during the Victorian era. When Prince Albert died in 1861, Queen Victoria went into a state of mourning for over 40 years. She would often wear Black Memorial jewelry, Jet and Onyx.

With the public seeing this, it rose immensely in popularity and soon enough was a staple of the Victorian period. Oftentimes, mourning jewelry included a relic from the deceased. Memento Mori objects and jewelry were created to remind one of mortality. These objects of adornment, most often rings, are referred to as Memento Mori a succinct term reminding us of our transience on Earth, and a warning to prepare ourselves for whatever other realm awaits us.

This type of item really gained popularity during the 1500s. Onyx is a chalcedony quartz that is mined in Brazil, India, California, and Uruguay. It usually has a fine texture and black color; however, some onyx also displays colored bands or ribbons against a black or brown background.

Red onyx is quite rare and desirable and is also known as sardonyx. Onyx that has a deep green shade is known as Brazilian green onyx, and is very rare; it became a popular stone for sculpture and jewelry in the 1920s and 1930s.

The word onyx comes from the Greek word which can be translated as nail of a finger or claw. In Greco-Roman myth, the goddess of beauty, Aphrodite, lay sleeping when Eros cut her fingernails and left the clippings scattered on the ground. Because no part of a heavenly body can die, the gods turned them into the stone which later became known as onyx. Seed pearls occur naturally and are used most often as a decorative border, as tiny accents in small patterns, or in larger clusters woven together to make up an entire piece of jewelry. They are normally less than 2 mm in diameter.

They were imported from India and China and carried a hefty price tag due to this. Seed Pearl jewelry was used often for special occasions such as weddings, Mary Todd Lincoln received a seed pearl parure for Lincoln's inauguration.

Enameling originally dates all the way back to the ancient Persians of Meenakari. The technique involves bonding powdered glass to a base, usually gold, by firing (heating and melting the glass onto the metal). The glass hardens to form a layer of pigment over the metal. Enamel is made of colored powdered glass or may include clear powdered glass that is mixed with colorful metallic pigments. It was used by the ancient Egyptians, Greeks, and Celts; and later the Chinese and Georgians.

It resurged in popularity in the 20th century. It is primarily used on decorative art or jewelry, usually small in size. Besides jewelry, enamel can also be applied to glass, ceramic, stone, and various other materials. Taille dEpargne is a variation of enameling where engraved lines are incised directly into the metal to form a design.

These lines are then filled with opaque enamel, usually black, to emphasize the engraving. This technique was often used to decorate bracelets, watch cases, chatelaines, and mourning jewelry. Buttercup settings were made popular during the Victorian era. The setting features a series of high raised prongs, which rise from a base of six scalloped edges, serving to secure the stone and make it more prominent to any viewer. From above, this setting resembles its namesake, buttercup flowers.

The seller is "abeautifultimeco" and is located in Fort Collins, Colorado. This item can be shipped worldwide.