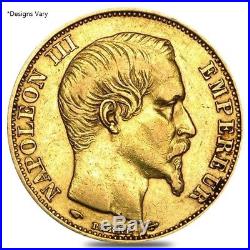 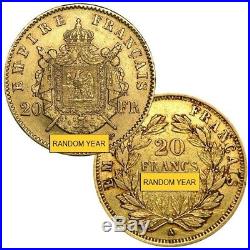 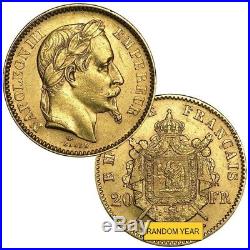 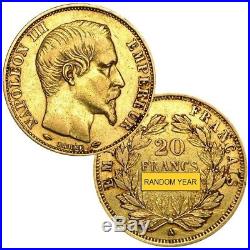 90% & 40% US Silver Coins. 20 Francs French Gold Napoleon III AGW. These 20 Francs coins exhibit one of the two designs, a bare-headed portrait, or a laureate portrait of Napoleon III, with the inscription "NAPOLEON III" and "EMPEREUR". The engravers name BARRE appears below the head.

The reverse design consists of either an ornate shield with the value "20 FR" at the sides, the surrounding above the wreath inscribed with "EMPIRE FRANCAIS", and the date is below the shield; or the value "20 FRANCS" and the date in three lines surrounded by intertwined laurels instead of the shield design, with similar inscription. The mintmark "A" or "BB" appears to the left of the date, or below the wreath. The edge is inscribed in raised lettering "DIEU PROTEGE LA FRANCE". Coins of this type were issued from 1852 to 1870 inclusive. Charles Louis Napoleon Bonaparte was born on the 20th April 1808 and died on the 9th January 1873.

He was the son of King Louis Bonaparte of Holland, a younger brother of Napoleon Bonaparte. His mother was Hortense de Beauharnais, daughter of Napoleon's first wife Josephine.

Under Napoleon III, France pursued an active foreign policy, by challenging Russia's influence in the Ottoman Empire, successfully participating in the Crimean War, and launching a naval expedition in 1858 to punish the Vietnamese and force them to accept a French presence in the country. Paris was substantially rebuilt under Napoleon III, to reduce the ability of future revolutionaries to challenge the government. Large sections of the city were razed and the old convoluted streets were replaced with many broad avenues, with the intent of allowing the cannon to be used easily within the city. He also directed the building of the French railway network.

Hoping to achieve military glory to match his uncle Louis and forced by the diplomacy of the German chancellor Otto Von Bismarck, Napoleon began the Franco-Prussian War in 1870. In the battle against Prussia in July 1870 the Emperor was captured at the Battle of Sedan (September 2) and was deposed by the forces of the Third Republic in Paris two days later. He died in exile in England on January 9, 1873.

Married to Empress Eugenie, aish noble of Scottish andish descent, he had one son, Eugene Bonaparte. He is buried in the Imperial Crypt at Saint Michael's Abbey, Farnborough, Hampshire, England. Dates and types of the coin will be randomly picked from available stock. Like all of our other gold coins, this one is guaranteed to be 100% authentic. By purchasing from Bullion Exchanges, you are agreeing to all of our Terms and Policies.

Bullion Exchanges reserves the right to refuse or cancel any order reviewed by our Compliance Team, which are deemed questionable or have increasing potential risk for being fraudulent. All customers are subject to a review at our own discretion, in which additional information, identification and/or documentation, may be requested. A prompt response would help expedite the fulfillment of your order. Packages are no longer insured if the tracking information shows the package is delivered. We will only be liable to cover packages that are lost in transit or damaged.

There are no exceptions to this policy. Once an order is placed, it cannot be modified or cancelled. Using high definition digital video, we record the packing of our products to affirm accuracy. Bullion Exchanges reserves the right to refuse or cancel any order reviewed by our Compliance Team, which are deemed questionable or have potential risk for being fraudulent. The submission of an order and subsequent receipt of a confirmation locks in your order and affects our metal hedging requirements and thus we are unable to make any price adjustments.

Our in-house numismatist staff assign conditions to all products. The condition assigned to the products is derived from industry-wide standards. Please keep in mind that most images are stock images, and therefore you should not expect to receive the pictured products. Silver products, and some gold as well, may exhibit milk spots, and/or toning, which are normal and do not change the condition described in the listing, nor the value of the product. Coins that are holdered by one of the major grading companies are graded based on the condition they were in at the time of grading.

However, at times, coins do tend to develop spotting or toning which are a normal happenstance in coins. Please keep in mind, the appearance of the toning and/or milk spots does not mean that the coin is not the grade specified on the actual slab. In instances where there is a discrepancy where the customer believes to be unjust, please refer to the grading companys guarantee policy. Both NGC and PCGS have a program where they will compensate the owner of the current coin if they believe the coin deserves a lower grade than it had originally received. Please note, bullion coins, bars and rounds are mass-produced and are not struck to the same quality standards as collector coins.

These bullion products are not certified and therefore will not always be 100% perfect. All sales are final and therefore in cases when a product is offered on a Deal Price, previously locked-in orders for that product will not be subject to price reductions or cancellations.

Bullion Exchanges reserves the right to cancel sales that may or may not have typography issues within the listings, pricing inaccuracies, systematic faults by our system, and/or errors caused by eBays system, without further notice. Purchasing bullion and/or coins involves price risk, and the purchaser assumes all such risk.

We do not offer or make price adjustments based on the market fluctuations of precious metals, or for any other reason. We will never ask the customer to pay more for a product if the price significantly increased, so please refrain from requesting price adjustments after market prices decrease. The item "20 Francs French Gold Napoleon III AGW.

exchanges" and is located in New York, New York. This item can be shipped to United States.