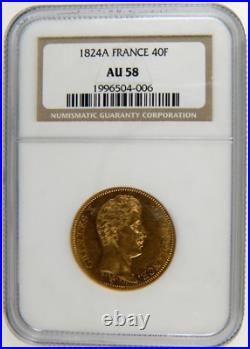 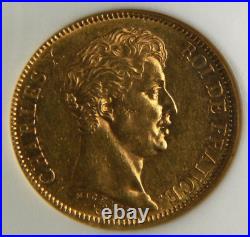 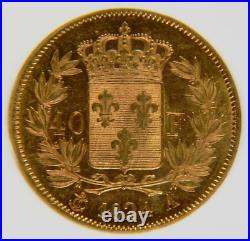 1824A Gold 40 Francs Gold Coin NGC AU 58. Charles X (Charles Philippe; 9 October 1757 - 6 November 1836), called "the Beloved", was known for most of his life as the Comte d'Artois before he reigned as King of France and of Navarre from 16 September 1824 until 2 August 1830. An uncle of the uncrowned King Louis XVII, and younger brother to reigning Kings Louis XVI and Louis XVIII, he supported the latter in exile and eventually succeeded him. His rule of almost six years ended in the July Revolution of 1830, which resulted in his abdication and the election of Louis Philippe, Duke of Orléans, as King of the French. Exiled once again, Charles died in Gorizia, then part of the Austrian Empire.

This coin was made inthe Paris Mint. 40 Franc coins are not dissimilar in size two a double sovereign with a diameter of 26 mm they weight 12.9 grams have.